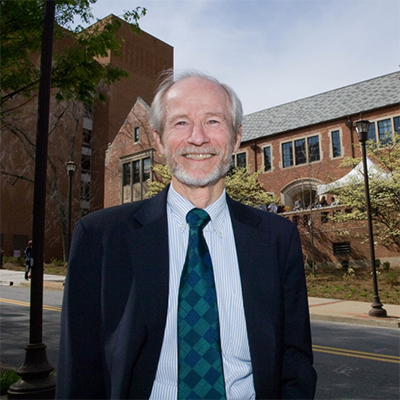 Patrick McCarthy came to Georgia Tech in July 2000 on a mission. Sue Rosser, then dean of the Ivan Allen College of Liberal Arts, had recruited him to help build the School of Economics into a high-caliber unit focused on research, teaching, and service.

He spent 11 years as chair in the School, working to build morale, recruit top-notch talent, and develop programs, including the School’s first graduate programs.

Despite early difficulties and setbacks, McCarthy “kept his eyes on the prize” and helped build the foundation for the strong School that exists today, according to Rosser.

“Always persistent, Pat worked to bring everyone along with the plans so that progress was not derailed,” Rosser said.

Now, after nearly 20 years at Georgia Tech and an academic career of more than 44 years, McCarthy is retiring.

“For me, this is simply a transition,” McCarthy said. “I view this as something similar to a ‘commencement.’”

‘A Trusted Source of Advice’

McCarthy leaves behind a strong legacy of research, teaching, and service at Georgia Tech.

In addition to his success as an administrator, McCarthy’s work in transportation economics, industry studies, regulation, and applied econometrics brought notice and funding to the School. His research appeared in more than 60 journal articles, six book chapters, and one authored book. He also contributed his expertise to reports for the Federal Aviation Administration, the National Science Foundation, the Alfred P. Sloan Foundation, the Georgia Department of Transportation, and the AAA Foundation for Traffic Safety, among others.

For 12 years, he served as an associate editor and later as an advisory board member for the journal Transportation Research Part E. He also served as a National Research Council study board member and on numerous professional boards and committees.

In the Ivan Allen College, he once stepped in to serve as the School of Modern Languages’ interim chair, served as the Reappointment, Promotion, and Tenure Committee chair, and supervised numerous Ph.D. students.

“Pat has been a great sounding board for me and a trusted source of advice,” said Laura Taylor, professor, and chair in the School of Economics. “I always appreciated his perspective, knowledge of the School and the Institute, and his willingness to share his experience with me. He’s left a strong mark on the School and a foundation that will help it to grow for decades to come.”

‘The Vision and the Skills’

McCarthy began his academic career as an instructor at California State University while completing his Ph.D. in Economics at Claremont Graduate University, an institution noted for its focus on transdisciplinarity.

In August 1976, he was named an assistant professor at Concordia University in Montreal. He spent two years there before moving on to Purdue University, where he would spend the next 22 years.

Shortly after being named Ivan Allen College Dean in 1999, Rosser sought to develop the School’s reputation by bringing in a strong chair from outside Georgia Tech.

“After a lengthy national search, we chose Pat McCarthy as the individual with the vision and skills to make Economics strong at Georgia Tech,” Rosser said.

When he arrived, the School had nine permanent faculty and seven visiting positions. He helped build the School to a peak of 19 full-time faculty. During his tenure as chair, he also helped develop the School’s Master’s of Science in Economics degree and the Ph.D. program, which launched in 2007.

“By no stretch was this easy, and only now are we beginning to see sustained fruits of the School’s modest beginnings,” McCarthy said.

In 2003, McCarthy was named director of the Center for Paper Business and Industry Studies.

“Although this was not directly in his personal area of research and expertise, Pat agreed to take on the initiative to provide needed collaborations with industry and colleagues in the College of Engineering and College of Sciences at Georgia Tech, as well as a large infusion of funds for one area of focus for research in Economics,” according to Rosser.

During his time as director, McCarthy secured more than $8 million in funding from the Sloan Foundation, industry, affiliated stakeholders, and Georgia Tech.

“This affiliation helped support School of Economics faculty and students, as well as faculty and students in other programs,” said McCarthy. “It also highlighted interdisciplinary research and helped establish, in a small way, a culture of sponsored research that one, at the time, did not see in economics departments.”

One of McCarthy’s more memorable periods on campus came in the fall of 2011. A year after he stepped down as chair, then-Dean Jacqueline Royster asked McCarthy to take over as interim chair of the School of Modern Languages following the sudden death of that School’s chair, Phil McKnight.

“I gained an appreciation of cultural differences across academic units and enjoyed the passion, collegiality, and willingness to help on the part of the Modern Languages faculty and staff,” he said.

McCarthy “Changed the Way I Viewed the World”

Colleagues in the School of Economics say he will be sorely missed.

“I can hardly think of anyone else, besides my parents and my English teacher, who has made a greater impact on my life path as Pat,” said Aselia Urmanbetova (MS Econ 2003; Ph.D. Public Policy 2015), associate academic professional in the School of Economics.

“He taught the courses that changed the way I viewed the world, he trained me in GTA (Graduate Teaching Assistant) and GRA (Graduate Research Assistant) roles, coached me as my advisor and Dissertation Committee Member, and guided and supported me as a mentor and friend,” Urmanbetova said. “Most importantly, Pat taught me the virtues of rigor, hard work, patience, benefit of doubt, and good cheer – all of which help me thrive as an individual on a daily basis.”

“I have benefited tremendously from Pat’s support and mentoring from his leadership as the School’s chair. I feel very fortunate to have met him when I first started my career at Georgia Tech,” Li said.

McCarthy said he plans to continue advising his last Ph.D. student, finish a couple of research projects, lecture in China, spend more time with his family, and play a bit more handball. He also is eager to support the School’s ongoing development efforts in any way that he can. He said he will surely miss his faculty and staff colleagues and students and looks forward to seeing them when he is on campus. But most of all, he will miss the start of new semesters on campus.

“The beginning of fall and spring semesters are alive with new and returning students, faculty, and staff, excited, which you can see in all aspects of their demeanors,” he said. “The anticipation and all that comes with a new semester are palpable. Walking around campus amid this, enjoying and maneuvering through the crowds and relishing the totality, that I will miss.”

Dante Christmas in the School of Economics and Michael Pearson wrote this article.